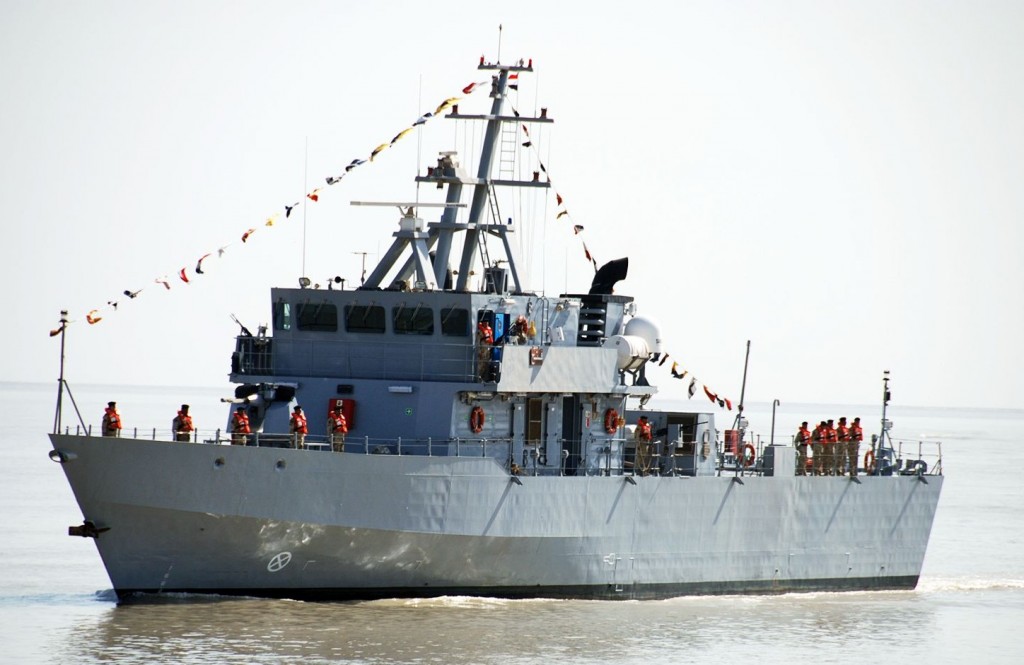 How Iraqi Navy was targeted during Gulf War

After 2 August 1990, once Iraq had overrun its hapless former ally, Iraqi naval patrol boats were able to slip out of Umm Qasr and down the coast between Kuwait and Bubiyan Island.

Iraq quickly secured the naval bases at Al Ahmadi, south of Kuwait City, and Shuwaikh, capturing most of the Kuwaiti Navy intact.

Kuwait had some twenty-three patrol boats and coastal vessels, the most significant of which were six German-built TNC-45s and two German FPB-57 missile patrol boats equipped with MM-40 Exocet missiles.

Some of these were pressed into service to support the Iraqi attack on Khafji almost six months later, but the Iraqi Navy was little more than a bit player during Desert Storm.

RAF Jaguar jets roaring over the Bubiyan Channel in early 1991 caught Saddam’s navy bloodied and fleeing the fight; with nowhere to hide the outcome was predictable.

The Kuwaiti island of Bubiyan was the very raison d’être of the Iraqi fleet, but once in Saddam’s possession it heralded the Iraqi Navy’s death knell. Saddam’s naval forces had always been the poor cousin to his powerful army and air force.

Geography had seen to this: Iraq is largely a landlocked nation, although it has a small outlet into the Gulf and part of its eastern border with Iran runs along the infamous Shatt-al-Arab Waterway.

By the time the preliminary air campaign for Desert Storm opened in mid-January 1991, the Coalition had already started clearing the Iraqi maritime presence in the adjacent area of the Gulf around Kuwait.

Although the bulk of the air effort was directed at the Iraqi Army, the Republican Guard and the Iraqi Air Force, Saddam’s navy must have been surprised by the intensity and tempo of the attacks it endured.

The Coalition assessed Iraq’s most dangerous naval assets to be the Exocet-armed ex-Kuwaiti TNC-45s and the Russian-built OSAs armed with Styx missiles (deemed an effective threat against surface targets), and their lower-capability Zhuks or patrol boats. It was decided to hunt these down as quickly as possible.

One of the Iraqi Navy’s roles was to evacuate its troops off the nearby islands and oil platforms once they discovered how vulnerable they were to air attack.

During one of these operations a suspected Iraqi minelayer was disabled near the Kuwaiti island of Qaruh, which was recaptured on 24 January. Despite these air attacks, the Iraqi Navy was instructed to assist with a probing attack on Saudi Arabia.

Iraq’s naval aspirations were constrained by the size of its coastline beyond the Shatt-al-Arab Waterway. Running to the west, Iraq has just 25km of coast; in contrast, tiny neighbouring Kuwait has 180km of coastline, plus the strategic islands of Warbah and Bubiyan, which dominate the estuary leading to the Iraqi port of Umm Qasr, and a large natural harbour north of Kuwait City. This situation was a source of constant friction.

Britain also supplied Iraq with six patrol boats. Iraq’s naval acquisitions paled into insignificance, though, compared to the vast array of larger warships that Iran was obtaining at the time, which included a destroyer and a number of corvettes.

What the Iraqis needed was a force multiplier, and they found it in the shape of Soviet missile patrol boats, which were considered revolutionary when they appeared in the early 1950s.

Torpedo boats were becoming increasingly vulnerable, as the North Vietnamese Navy (NVN) discovered in the early 1960s. Interestingly, while Moscow chose not to arm the NVN with missile boats, it looked upon Baghdad more favourably.

This created an effective fledgling Iraqi Navy based at Basra on the Shatt-al-Arab Waterway and at Umm Qasr, just north of the Kuwaiti border.

This development was a concern to both the Kuwaitis and Iranians as the Styx, with its 12-mile range, could be used to attack coastal targets, despite being primarily an anti-shipping weapon.

During 1975 and 1976 Iraq received five additional Soviet Osa-IIs, and the Iraqis were so enamoured of the Styx missile that they began to develop their own indigenous versions.

As far as Saddam was concerned, missile patrol boats were just the start of things. He had vastly more ambitious aspirations for his fledgling fleet: he wanted major surface combatants.

His program of major warship acquisition became apparent in 1979, when a contract was signed with Yugoslavia to supply a 1,850-ton training frigate, which was duly delivered in the early 1980s.

Throughout the late 1970s Saddam courted the major warship manufacturers, for he planned to acquire a navy that could take on Iran’s.

Saddam revealed the scale of his accelerated expansion programme for the Iraqi Navy in early 1980, when he ordered no fewer than 11 ships: 4 Lupo class frigates (dubbed Hittin by the Iraqis), 6 Wadi class corvettes (Assad or Hussa el Hussair), and a Stromboli class (Agnadeen) support ship from Italy worth $1.5 billion.

To equip these vessels, Iraq also ordered two A-109 and five AB-212 anti-submarine warfare helicopters, as well as Albatross, Aspide and Otomat-2 ship-to-ship missiles. Iraqi oil dollars ensured that Saddam could obtain the best that money could buy.

When the Iran–Iraq War broke out, the Iraqi Navy numbered just 4,250 men, of whom 3,200 were conscripts.

During the war the Iraqi Navy spent most of its time holed up in its bases. It played a very limited role in the ‘Tanker War’, conducted in the Gulf with gusto by the air forces of both sides, though Iraqi patrol boats were used to fend off Iranian naval commando attacks on Iraqi oil platforms.

In the mid-1980s China supplied Saddam with possibly more than a hundred Hai Ying-1/2 (HY-1/2) coastal defence missiles to arm Iraq’s Osa-IIs and its B-6 bombers (the Chinese version of the Soviet Tu-16).

Essentially copies of the Soviet Styx, the HY-1/2 missiles were designated by the West the CSSC-3 Silkworm and Seersucker respectively.

By the time the war came to an end, on paper the Iraqi Navy had 5 frigates and 38 patrol and coastal combatants, including 4 corvettes.
However, the four Hittin frigates, four Hussa el Hussair corvettes and the Agnadeen support ship remained stranded in Italy.

After the cease-fire with Iran, Saddam moved quickly to clear the ports of Umm Qasr and Khor al-Zubair, demanding that the seventy-five commercial ships trapped in the Shatt-al-Arab Waterway be moved.

Luckily for the Coalition, they were not delivered in time for the Gulf War. Nonetheless by this stage Iraq was itself producing versions of the Styx known as the Faw-70/150 and 200. Iraq also came up with another way to expand its naval capabilities.

On the night of 29 January 1991 elements of the Iraqi Army’s 5th Mechanized Division moved out over a 50-mile front to attack the Saudi town of Khafji.

They crossed the Kuwaiti border undetected and pushed south, supported by seventeen fast patrol boats, which moved down the coast bearing landing parties.

RAF Jaguars, operating out of Muharraq in Bahrain, pounced on the naval element of the assault, hitting at least two of the vessels, including a landing craft which is believed to have sunk, and scattering the rest.

The Royal Navy also got in on the act and on the same day attacked some Iraqi patrol boats that may have been heading for the Khafji operation or were simply trying to flee to Iran.

British warships detected the boats and launched Lynx helicopters armed with Sea Skua missiles. In total, twenty-five missiles were fired, of which eighteen hit their targets. Seven vessels were sunk and hits were registered on a number of other smaller boats.

In the desperate Battle of Bubiyan Island twenty Iraqi naval craft attempted to run the channel between Bubiyan and Warbah into Iranian waters.
Chase was given and a turkey shoot followed; only two damaged vessels – a patrol boat and an amphibious ship-managed to escape the deluge of bombs and missiles laid down on them. By 2 February 1991 the Iraqi Navy was assessed to be incapable of mounting any further offensive action.

With Kuwaiti waters secured, US battleships began to fire on Iraqi shore defences around Kuwait City on 23 February and the following day the ground war commenced.

Iraqi naval defences were not quite finished, however, for on 25 February two Silkworm missiles were fired at coalition ships.

One was shot down by HMS Gloucester’s Sea Dart system and the other crashed ignominiously into the Gulf.

During the whole war twenty Iraqi naval targets suffered 247 air strikes. The only damage to coalition naval forces was due to mines. The Iraqi Navy was no more. 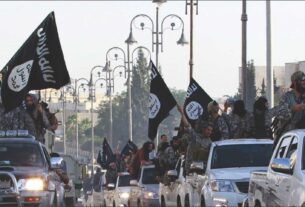